Well, it’s been a while since I’ve updated this because of the lack of wifi but here I am!

My experience began with a 5:00am wake up call after a Sunday Funday (and very Sunday Funday).  Getting up was a little rough!  Needless to say my wonderful sisters (and Adam) were there to help me as I freaked out about the weight of my luggage.  It was like I was in a movie in which a frantic girl is throwing things out of her suitcase and over her head!  Very comical.  Anyway, finally made it to the airport, got checked in and then into the long line that awaited me.  This is where the tears fell again…and again…and again.  I think most of you have seen the pictures on FB.  I got through security pretty quickly, got a coffee and bagel from Starbucks and waited to board.  Miami here I come!

In Miami, as I was at baggage claim trying to figure out how I am going to carry everything and I ran into Sia.  My first Peace Corps buddy!  We caught the shuttle and within 15 minutes we were at the hotel.  I had enough time to get to my room change meet my roommate Chelsea (from South Carolina) and get down to registration.  I was extremely tired as I went down to registration but eager to meet everyone!  Afterwards, I had to eat quickly before our meeting started (which was hard for this vegetarian in a Cuban neighborhood and I don’t speak Spanish.  Elise!!!!  Where were you??!!).  We met until 7:30pm then a bunch of us ordered pizza and gathered in the conference room where we had our training.  I found the bar so was able to grab a glass of wine and bring it with me to complement the pizza.  There was a lot of talking during the pizza gathering and we were able to get to know each other on another level.  After we were finished, Molly, Kristina, Margaret and I all went to grab a drink at the bar.  Other’s went out, but I was so tired and we had a semi early morning that I wanted to get a good night’s rest.  Little did I know that it would be my last one for the next week.

The next morning, we woke up early and went to the airport.  Thankfully we got there early because it took forever for us to check in!  In fact, the TSA line was WAY faster than the check in line.  When we finally made it to the gate we had just enough time to grab a coffee (last Starbucks for 2 years!), a bagel and eat before we boarded our flight.  I was sat on the aisle…YES!...with Caitlin and Gabrielle on the inside.  These ladies were wonderful to sit by (and we were all vegetarians and only ate a roll because there was nothing for us to eat) and 3 hours later we were in Trinidad.  For some reason, people cannot figure out what they would like us to do so we are told a couple of things before we actually knew what is going on.  We de-boarded the plane, went through another screening (good lord!), then had to wait for about 1 ½ hours before the next flight started to board.  While in the Trinidad airport, there was a liquor store so a few people bought liquor.  I ended up buying a beautiful dress which I can’t wait to wear!!!

On arrival at the Guyana airport, we were let out on the tarmac and walked right into a welcome committee of Peace Corps staffers.   After passing through customs we picked up our bags and met more staffers and volunteers outside who were cheering for us and had a banner!  We said goodbye to our luggage, took a picture as a group, then were on our way to the hotel where we were spending our first night in Guyana.

Since I have limited wifi, I am going to try my best to get an update out once a week for now.  Hopefully I’ll be able to keep it up! 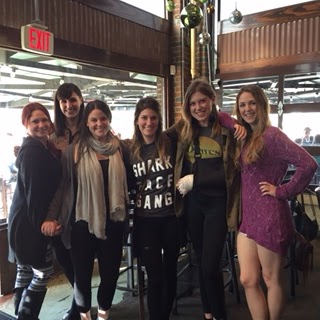 Sunday Funday with the Ladies! 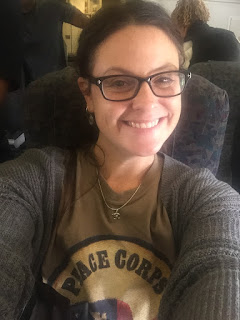 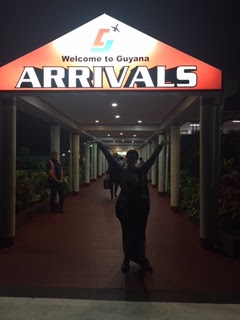 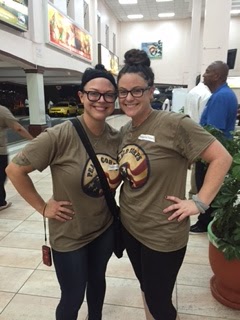 Caitlin and I at the Guyana airport 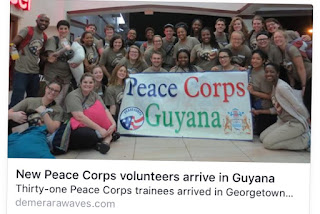 The contents of this website are personal and do not reflect any position of the U.S. Government or Peace Corps.

Things I need in Guyana